"Joining ESO will give new impetus to the development of science, technology and innovation in Brazil as part of the considerable efforts our government is making to keep the country advancing in these strategic areas," says Rezende.
The European Southern Observatory has a long history of successful involvement with South America, ever since Chile was selected as the best site for its observatories in 1963. Until now, however, no non-European country has joined ESO as a Member State.

"The membership of Brazil will give the vibrant Brazilian astronomical community full access to the most productive observatory in the world and open up opportunities for Brazilian high-tech industry to contribute to the European Extremely Large Telescope project. It will also bring new resources and skills to the organisation at the right time for them to make a major contribution to this exciting project," adds ESO Director General, Tim de Zeeuw.

The European Extremely Large Telescope (E-ELT) telescope design phase was recently completed and a major review was conducted where every aspect of this large project was scrutinised by an international panel of independent experts. The panel found that the E-ELT project is technically ready to enter the construction phase. The go-ahead for E-ELT construction is planned for 2011 and when operations start early in the next decade, European, Brazilian and Chilean astronomers will have access to this giant telescope.

The president of ESO’s governing body, the Council, Laurent Vigroux, concludes: "Astronomers in Brazil will benefit from collaborating with European colleagues, and naturally from having observing time at ESO's world-class observatories at La Silla and Paranal, as well as on ALMA, which ESO is constructing
Enviar esta postagem
Marcadores: Notícias 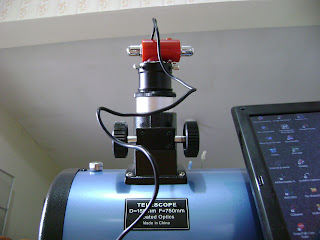